When Second Wind Community Concert Band was planning to celebrate their 25 years of existence for 2018, founder Laura Mercer, wanted to create some kind of legacy to honour the 25 years.  One of the ideas was to remember a great Nova Scotia Bandsman, Ron MacKay who was a mentor to Laura and helped her start Second Wind way back in 1993.  He was one of the Music Educators that shaped music through concert band experiences in Nova Scotia and many who knew him or were educated by him referred to him as the Godfather of Concert Music Education in NS.  His influence has created many professional musicians throughout NS and Canada to this present day. He believed in the Beginning Musician no matter the age and he knew how to inspire.  He wrote music for the early levels as well as advanced musicians always with the teaching of skills in mind and making it fun to play.  He wrote many compositions for Second Wind and community bands around NS and Canada.  One of his pieces “Mercer’s March” is presently on the book list for the Department of Education for teachers.

Since Ron’s passing in 2008, Laura has maintained the “Music For Life” tag line that they coined together in their philosophical discussions.  There are so many things that now tie Ron’s name and memory to the new musician that Laura felt this course idea could be another way to keep his legacy alive.

There was an ulterior motive to Laura’s idea as well.  Maybe it would be special to connect with NSCC here in Sydney, as she knew that there was a plan to create a music program at NSCC Marconi Campus, in the near future.  Students from that new music program and the leaders with Second Wind could be the instructors for the continuing-ed 15-week course called “‘Music For Life’ – The Ron MacKay Adult Community Concert Band Course” and it could be a part of the NSCC’s curriculum perhaps.

It was a perfect fit and with the support of Principal Fred Tilley and the NSCC campus’s, they felt that this fit the community mandate of the NSCC.  In Laura’s mind, it was maybe creating that so-called ‘farm-team’ idea for Second Wind to keep their membership always growing with skilled musicians.

The MacKay Family and the ronmacmusic company have endorsed this idea and are so excited to keep their father’s music legacy going by creating this ‘Music For Life’ course.

Welcome and/or welcome back to the music world. We are going to take you on a 15 week journey of a huge learning curve. How good it gets depends on the time you put in. Missing a class means you’ve missed some important information and yes that will leave you behind. However, if you practice through the week and strengthen the skills you’ve learned you will move forward.

There’s multiple skills you learn when taking up an instrument and many of the skills are at the same time. You learn to make a sound, count it’s length and read what your doing. Much like following a recipe. Don’t improvise until you know what you’re doing.

Our first 5-6 weeks will be with our artistic team where you will receive expert instruction on your instrument as it’s their speciality. Then each week after that we will have two instructors until 2/3rds of the way through and we will get the whole team in again to do check points.

Then once again at our second last class. For the last class we would like to make it a performance of what you’ve learned and celebrate your successes with The Second Wind Community Concert Band. This will bring us to our last session in June.

Enjoy this experience and never say the word CAN’T. It is not in our vocabulary. You will be able to do this. 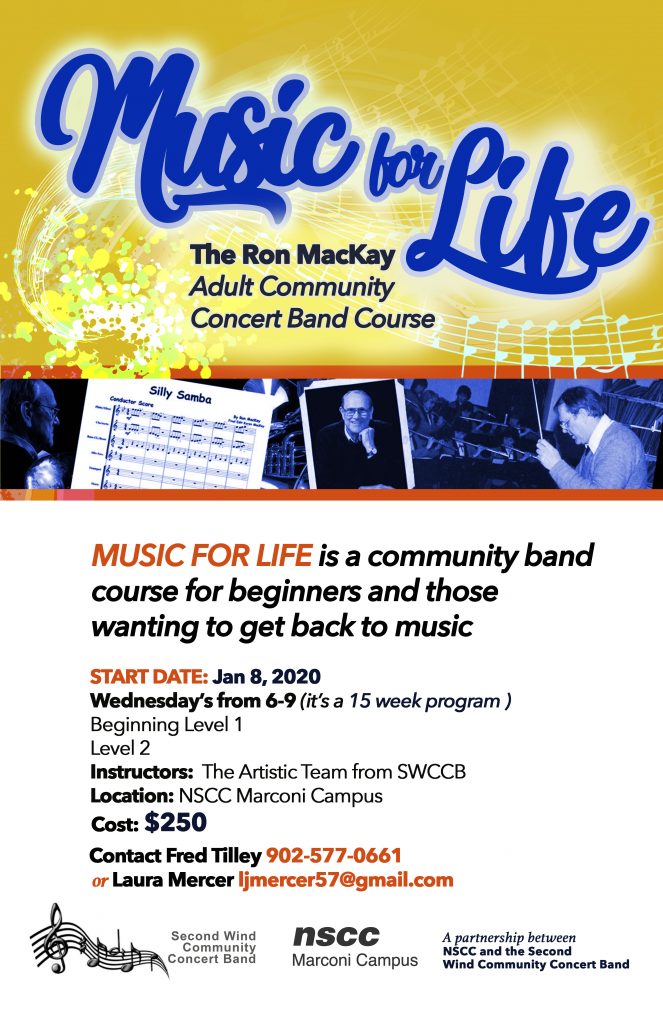